3100 prisoners can be released. It is expected that 3100 prisoners can be released. Prisoners’ relatives are coming to the jail every day to ignore the horrors and lockdowns that are taking place across the country to prevent Corona infection. With twice the capacity of captive captive, the virus is likely to spread rapidly. Every day there are too many threats to the relatives coming to the jail.

Although every person has the facility of spraying disinfectants at a distance of 3 feet by 3 feet. Nevertheless, the idea is that once infection is spread in the prison, it will not be possible to prevent it in any other way. Because the number of prisoners is twice the normal. The detainees who were getting free every day due to the closure of the court are stuck and even more inmates are entering the house every day.

Talking to an inmate who was released from prison, it is reported that the new prisoners who are entering the jail are being kept in quarantine for 14 days. Besides, adequate cleanliness and 3 feet distance have been provided in the jail, sprinkling antibodies, not allowing more than one person to meet a prisoner.

See the details below……

3100 prisoners can be released 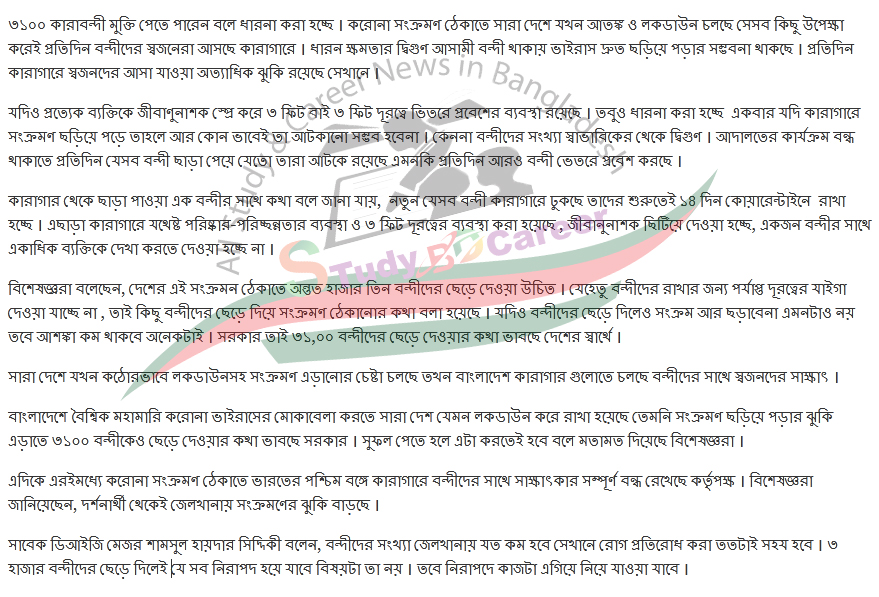 Experts say at least three thousand prisoners should be released to prevent the country’s infection. Since there is not enough space available to keep the prisoners, some prisoners have been told to stop the transmission. Even if the prisoners are released, it is not possible to spread the infection, but the fear will be low. The government is therefore planning to release 3100 prisoners in the interest of the country.

Relations with detainees are being held in Bangladesh prisons throughout the country, while strictly trying to avoid transmission with lockdown.

The government is also planning to release 3100 prisoners to prevent the spread of infection, as the country has been locked down to tackle the global pandemic corona virus in Bangladesh. Experts have opined that it must be done in order to get the benefits.

Meanwhile, authorities have stopped interviewing detainees in West Bengal jail to prevent coronary infection. Experts say the risk of infection in prison is increasing from the visitor.

Former DIG Major Shamsul Haider Siddiqui said the lower the number of prisoners, the easier it will be to prevent disease in prison. It is not something that will be safe if you release those thousands of prisoners. However, the work can be safely carried forward.

Holidays have been extended till April 11.